It is estimated that 2%-8% of the population worldwide and over 10 million American suffer from the chronic condition known as fibromyalgia. Patients with fibromyalgia present with recurrent delocalized pain, burning, tingling, and numbness in the extremities, chronic fatigue and trouble sleeping, as well as memory and other cognition problems.

Fibromyalgia is a multi-faceted condition and can require various different methods of treatments. Common methods include regular exercise and changes in diet, cognitive behavioral therapy (CBT), low-level pain medications and, in extreme circumstances, opioids. There is a growing body of evidence on the efficacy of using cannabinoids such as THC and CBD in treating neuropathic pain that is caused by conditions like fibromyalgia. It is our goal to give a clear and scientific overview of fibromyalgia and the potential benefits that CBD can have in managing symptoms from fibromyalgia.

In this article, we will cover what exactly fibromyalgia is and how CBD is used to treat the condition. We will cover issues such as: 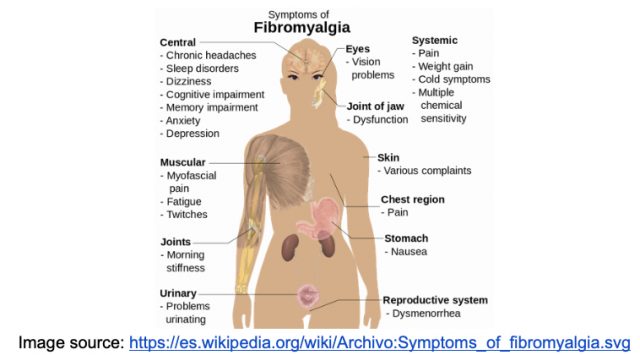 Fibromyalgia is a neurological condition that is characterized by the presence of chronic pain all over the body. Other symptoms associated with fibromyalgia are lethargy and constant tiredness, problems with memory and concentration, numbness and tingling in various parts of the body, bowels and bladder problems, depression, anxiety, and PTSD. Patients diagnosed with fibromyalgia report heightened sensitivity to pain and heightened pain response to tactile pressure. Specifically, fibromyalgia is classified as a disorder of pain processing because it involves a malfunctioning of how the body interprets and signals sensations of pain. The word “fibromyalgia” is a combination of Greek and Latin words that translates literally to “fibrous connective tissue and muscle pain.”

Currently, the exact causes of fibromyalgia are not known. The wide symptom profile and lack of standardized diagnostic criterion contribute to this confusion. Most of the time, diagnosis is not explicit and is only reached once other plausible conditions have been ruled out. It is believed that the condition is related to numerous genetic and environmental factors, including psychological stress and trauma. It is also believed that fibromyalgia may be related to other conditions such as hypoglycemia, dermatological disorders, and kidney problems.

Fibromyalgia seems to be heavily correlated with mental disorders such as major depressive disorder and bipolar disorder, thought the direction of causation in these cases is not clear.

Fibromyalgia is a relatively newly discovered condition and in the past patients’ complaints with symptoms have been dismissed as being “merely psychological.” Thankfully, the pendulum has shifted in recent years and the general medical consensus is that fibromyalgia is a real debilitative medical condition, even if it does not have a clear biogenic etiology.

CBD is present in many strains of cannabis in varying concentrations. Generally, CBD is made from cannabis or hemp plants through a chemical process that extracts the plant’s various chemicals and leaves behind a pure substance.

CBD is normally produced as a liquid oil solution that is made from pressing and filtering hemp through some carrier substance; normally olive oil. CBD can also be extracted using carbon dioxide and ethanol, though these methods tend to be more resource intensive and thus more expensive.

CBD can be consumed in multiple ways. Its most commonly directly ingested in oil form through an eye dropper. An active dose is small and only takes a few drops on the tongue. There exist several flavored oils for those who do not like the taste of pure CBD oil.

CBD can also be made into crystal form and smoked or vaped. Smoking and vaping is extremely risky as it can leave an oil and chemical residue in the lungs. We recommend avoid inhaling any CBD chemicals. 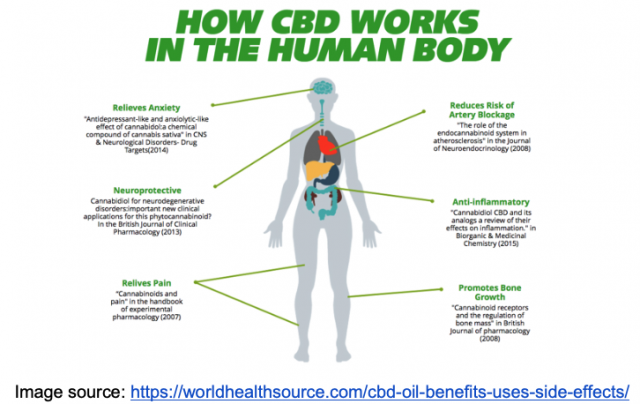 Is CBD the Same as Marijuana?

In most cases, CBD products are made with little to no concentrations of THC so they have little to no psychoactive effects. CBD is also not illegal and its sale and use are generally unrestricted, unlike marijuana and THC. CBD also does not require a prescription to buy, unlike medical marijuana. 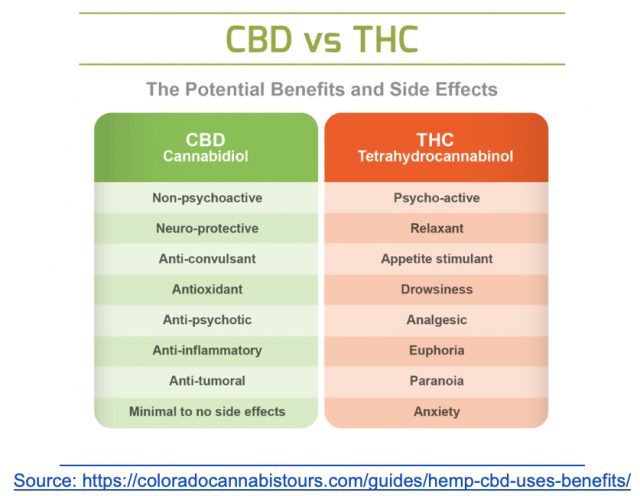 CBD and Fibromyalgia: The Science

We should first note that the FDA has not approved CBD for the treatment of fibromyalgia. However, that does not mean that there is no evidence whatsoever to support the claim that CBD has some therapeutic effects for patients with fibromyalgia.

The two main dimensions of fibromyalgia symptoms that have seen the most CBD research are on pain management and sleep. We will take a look at the effect that CBD has on both of these domains.

Most clinical research done on CBD is focused on its uses for pain management. CBD has been shown to act on the body’s natural endocannabinoid system to reduce instances of both nociceptive pain (mechanical pain) and neuropathic pain (nerve pain). It is believed that CBD manages pain through two main mechanisms. First, CBD interacts with immunoreceptors in T-cells to slow the production of lymphocytes. Lymphocytes are a major cause of swelling and inflammation in damaged tissue, which can increase pain levels by pressing on nociceptors. CBD inhibits the production of T-cell lymphocytes, which lead to less inflammation and less pain.

The second mechanism involves the action of CBD on CB2 pain receptors in the body. CBD interacts indirectly with these receptors, which inhibits their capacity to send and receive pain signals. CBD interferes with this signaling which has been shown to reduce the frequency and intensity of neuropathic pain.

There is an extensive amount of clinical evidence noting the effectiveness of CBD for general pain management so we will not cover all of it here Suffice to say, the general consensus among medical professionals is that CBD is an effective and safe way to manage mild to moderate nociceptive and neuropathic pain. The best part is that CBD users do not seem to build up a tolerance to the substance and CBD use has not been shown to create any physiological dependency, unlike many other traditional pain medicines.

Sleep disruption is another common symptom of fibromyalgia. The evidence of CBDs effect on sleep is not as extensive as its effect on pain management, but there is some evidence to suggest that CBD and other cannabinoids can improve sleep patterns in patients suffering from chronic pain. Despite this preliminary evidence, there is still more research that needs to be done on the subject of CBD and sleep.

Anecdotal evidence from users seems to indicate that the effects of CBD on sleep can vary greatly depending on the patient, time administered, and the amount ingested. Some people claim that taking CBD right before bed helps them get a relaxing sleep, while CBD may have a more stimulating effect on others.

Direct research on the effects of CBD on fibromyalgia is still sparse, yet there are good indicators that CBD ha potential as an effective treatment for fibromyalgia. One of the more recent developments in this research is that fibromyalgia, along with other non-specific pain disorders like irritable bowel syndrome, migraines, and multiple sclerosis, may be caused by Clinical Endocannabinoid Deficiency (CECD). According to the endocannabinoid theory, pathophysiological syndromes like fibromyalgia are due to deficiencies in the body’s natural level of endocannabinoids. The endocannabinoid system in the body is thought to play a role in a number of processes including pain sensation, sleep, memory, fertility, thermoregulation, and autonomic nervous activity. So, it makes sense that deficiencies in the functioning of the endocannabinoid system would be associated with the wide spectrum of symptoms common to non-specific pathophysiological conditions like fibromyalgia. 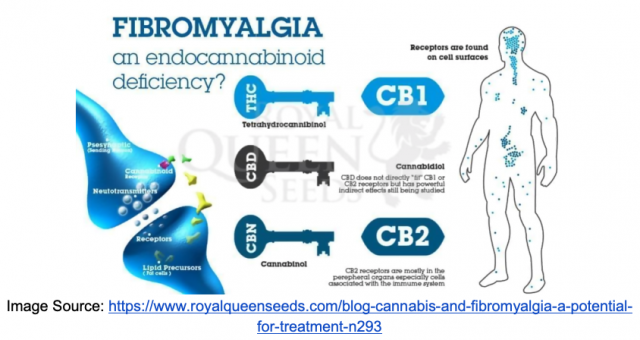 Aside from scientific data, there exists a slew of anecdotal stories from users who claim that CBD helps them manage their fibromyalgia symptoms as effectively or even better than other methods. To clarify, anecdotal stories are not equivalent to clinical trials and should be taken with a grain of salt, but they along with a growing body of positive clinical evidence suggest that CBD is a safe and effective way to manage symptoms from fibromyalgia.

To reiterate, CBD is meant as a way to manage symptoms of fibromyalgia; it is not a cure. Unfortunately, fibromyalgia currently has no known cure, though CBD can help those who suffer regains some semblance of normalcy.

CBD or Medical Marijuana: Which Is Better for Fibromyalgia?

Both CBD and medical marijuana are effective in treating the symptoms of fibromyalgia. CBD does have a few benefits over marijuana, including:

How Much CBD Should I Take?

The answer to this question depends heavily on the particular person and the severity of symptoms. Dosing is also made complicated as there do not really exist any standard measures for its manufacture and distribution. Individual experience taking CBD also factors into the dosage.

It is unknown how CBD reacts with other medications so make sure to consult your doctor before trying CBD. Your best bet is to start very small and increase your dosage in proportion to the effects and your needs. CBD is very safe and has extremely low toxicity, so you do not have to worry about accidentally taking too much. In fact, CBD is likely much safer than most current pain management drugs and is non-addictive.

If you have spent any time looking through CBD products you have probably seen the labels “isolate” and “full-spectrum” How do the two differ?

Isolates are made from industrial hemp and are filtered to remove all other chemicals, leaving behind a mixture of pure CBD. Full-spectrum tinctures, in contrast, have a blend of cannabinoids including CBD and some THC (though not enough to get you “high”).

There is some evidence that cannabinoids display an “entourage effect” in that they work synergistically to boost the efficacy of each other. In light of this, a full spectrum blend may be the most effective as it has multiple cannabinoids that can work together. The only reason to not buy a full spectrum solution is if you are worried about showing up positive on a drug test or have previous bad experiences with THC.

In this section, we will cover some of our criteria in choosing the best CBD products for fibromyalgia. One problem with the lack of regulations surrounding the sale and manufacture of CBD is that there are many incorrectly labeled products and outright scams. The following are important factors that separate the quality CBD products from the bad.

We recommend making sure that your next CBD purchase meets the 3 mentioned factors above. This will not only prevent an adverse affect, but could make a big difference in obtaining the desired benefits from taking CBD in the first place.

Just a reminder, the FDA has NOT approved CBD for use in the treatment of fibromyalgia. It is not a cure for fibromyalgia and should not be a replacement for proper medical treatment. However, there is a significant body of scientific evidence and anecdotal reports that CBD is an effective supplement that can significantly help manage the symptoms of fibromyalgia as effectively or even better than traditional pain medications. Best of all, CBD is legal, non-toxic, non-addictive, and requires no prescription to buy.

CBD is a great alternative to pain management, especially considering the severity of the current opioid crisis. It is a fact that states that legalize cannabinoids for pain treatments show a marked decrease in rates of opioid addiction and overdoses. Many CBD products are all-natural and do not contain artificial chemical, pesticides, or hormones. So, if you think you want to try CBD, consult your doctor to make a treatment plan and dosage that is tailored specifically to your needs.